Learning How to Say Goodbye

Sorry for the radio silence the last month. It has been a rough ride.

My mother went into the hospital at the end of September and started to decline rapidly. She passed away last Monday and it all feels like a blur. Time is twisting on itself and I can’t remember what happened when.

My mother has not been well for a few years, and her health took a nosedive at the same time mine did. We struggled to support each other and I’m trying to remember that I did the best that I could. My father, my sister, and I keep saying "it happened gradually and suddenly," and it really did. Trying to help my mother and figure out what was going on has caused tremendous strain and stress in my family. We had to place her in an assisted care facility earlier this year, at the age of 60. Her doctors struggled to find a diagnosis and although many of her symptoms seemed similar to dementia or Alzheimer’s, her doctors were skeptical of that diagnosis.

When she went into the hospital, we all expected that she would improve and be able to return to her care facility but every time I saw her she was worse and worse, until I got the call from my step father that she had to be moved into hospice care.

Thankfully, she was able to do hospice care at the same care facility where she had been for the last 6 months, a fantastic place with people who took great care of her. I’m thankful every day that my step father found such a wonderful place for her. The irony is the facility is only about a mile or two from my house, but since I had to stop driving and became home-bound last year, I was not able to visit her very often. This is something that is causing me tremendous regret right now. I was there with her to say goodbye at the end, and as she was in hospice I would play the old upright piano at the facility for all of the other residents, for my mother’s spirit. The residents loved it so much that I’m hoping to go back there regularly and play for them, something I wish I had done when my mother was there. It will be a way to give back to the people who took care of her and treated her like family.

I pushed myself very very hard to be supportive and help my family the last few weeks and have been bedridden because of it. I’m getting to the other side though. We are having a celebration of life gathering for my mother this weekend and I’m working hard to regain my strength to be present. So many people will be there—people I haven’t seen in many years and some I’ve never met before. I made a playlist of all my mother’s favorite music to play during the gathering: Elton John, Fleetwood Mac, The Eagles, Joni Mitchell, etc. I also included some of the 70s progressive rock she loved, which I could never sympathize with. I owe her a great debt for the love of music and groove she gave me.

It seems absurd that all of the people she loves are going to be in one place and she won’t be there. Absolutely absurd. We have had so many gatherings at my parents’ house over the last 10-15 years. We have a large circle of friends that we love like family and they spent a lot of time with my family too. It will be good to celebrate her with another party with food, music, good company.

I hope that everyone remembers her as she was. She was one of the most generous people I’ve ever known. My sister and I both inherited her work ethic and perfectionism. Later in life, she became one of my best friends. My favorite memories with her are when my parents took us to Hawai’i in 2006 and 2008. She didn't want to get in the water but she waited for me patiently as I spent entire days in the ocean. She was the only one who really understood my strange sense of humor. I’d show her weird videos on YouTube or the latest memes and we would laugh so hard we’d cry.

There are hard days ahead. My birthday is next week and I won’t wake up to a call from her. We won’t watch the Macy’s Thanksgiving Day Parade together like we always did. My parents' wedding anniversary is in a few weeks, and they would’ve been married 24 years. But I know that as time goes on it will get a little easier. I’ll have less regret and disappointment and will instead only value the good memories. I’ve never lost anyone close to me before and it seems like a cruel twist of fate that my mother would be the first.

I wrote her obituary and you can read it here.

I know that she is finally free, free of the body and the brain that caused her so much torment, and I at least feel happy for her that she is free. I'll never understand why it had to be so soon. I'll find some peace with it eventually. Love you forever mom. 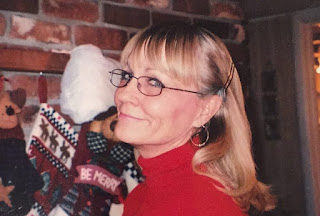 Walking here without you now
I will always have you with me
Your blood flows through my veins, the imprints of life you imparted that made me real
Your green gaze I inherited
The succulents and flowers you planted that flourish still, as if your fingerprint is there
Our memories of sea, salt, air
The scent of islands that made you sing
Everything you gave without asking in return
How you endured under strain

Now unyielding bonds beyond the linear that reach where you are
The great circle
A return to star dust, return to mother
Your embrace I still sense
The souls you lost you never forgot, holding you now
And your spirit finally emancipated

Your light burned too fast but it burned the brightest