It happened again. Just as I was starting to recover—ready to grasp a bright spot—I make more mistakes and go back to where I started.

Stuck in this cycle of slight improvement, push just a little too hard, then end up back at the beginning. Trying to reclaim that moment of improvement. Over and over.

I push you body to exercise when you can’t. I make you walk when paralysis has overtaken your limbs. I have treated you as the enemy for years when we were always a team. Always.

Sometimes I just get so tired, so frustrated, so angry at the ever-increasing limitations. So tired of being shackled under the weight of illness. Then I over-step, ask for too much, push too hard.

I ask for forgiveness.

I tried to have fun with my nephew a few days ago. I tried to play for just a few minutes.

But you can’t do that anymore. That's no longer within the parameters of your abilities.

I was bedridden for hours and couldn’t walk the next day. I have struggled to leave my bed and couch since. I don’t want my nephews, my family, my friends to remember me as a lump on the couch—someone who asks others what they’re doing, who listens to other people’s dreams and aspirations, who rarely leaves the circumference of a room. I don’t want this.

So I push myself too hard every day. I ask too much every day.

When I rail against my fate and make questionable decisions in protest of illness, you remind me that my limitations are serious. The consequences are real. My breath leaves, my limbs no longer move, any hope of verticality is dashed. Crash so hard and so deep that swimming to surface is impossible.

I rest in penance.

I ask that we try again. One more time. I’ll listen to what you tell me. I’ll ask no more than you can give. I’ll treat my limitations as sacred.

Because when we’re a team, we can do great things.

You give me energy to play music—to get lost in a melody for a short time, to improvise and roam in the geometry of sound. It is in those moments that I am truly free.

You give me enough energy to go outside sometimes and walk a few feet or look at the flowers growing in my yard. In those moments, I feel like I’m a member of the world again.

So we start over, start the cycle again, and maybe this time I learn from my past mistakes and press forward enlightened and wiser. 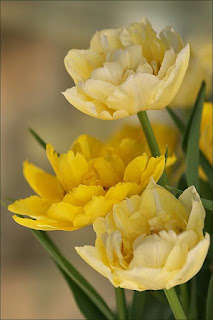 The Month That Was

Since I didn’t manage to post any weekly updates in February, I’m going to do a monthly review—even though we’re in March now.

-  February was a rough ride. I’m still trying to recover from the intestinal infection that started months ago, and I had to spend much of the last few weeks unable to leave my bed or couch. But I feel like I’m finally turning the corner. I had to cancel my brain MRI at Stanford (this is the third time I’ve had to cancel it), which doesn’t help my terrible record so far of showing up to appointments in 2016.

Struggling to show up has made the emotional frustration of illness unmanageable. I put off writing this post until I could get my frustration under control. I can manage being bedridden and very ill for weeks on end but when I can’t show up to appointments, manage my care, or accomplish any of the basic things I need to do every day, then the frustration becomes unwieldy.

The last few days have been better though. We’re having an unseasonably warm patch here in California. It’s hard to feel down when the sun is shining like it is.

- I’ve been very active my whole life and even though my body continues to become more limited, I’m still militant about exercising—to the point that I’m constantly overdoing it. I’m still learning that I can’t do the exercise I want to do. I have to do what works for my body and adapt to its abilities. The last few weeks, as soon as I start to feel a little better I try to get back on my stationary bike and then end up bedridden again. Exercise is essential for managing Dysautonomia and fending off de-conditioning, but since Myasthenia has taken over my body as well, I’m very limited in what I can do. If I push my body even slightly past its limits, the weakness turns into paralysis and my breathing completely shuts down. It’s really not cute.

So I’ve been starting to scale back and adapt my exercise routine. I’ve been doing a mix of simple yoga, pilates, and some of my physical therapy exercises in the morning, and I am seeing results! Usually, on the days I exercise I’m tapped out for the rest of the day but doing these simpler exercises doesn’t completely wipe me out for the day. I’m able to accomplish more.

A few years ago, I started to suddenly have balance issues and the problem, like many of my other symptoms, has only worsened since then. I do the exercises my physical therapist gave me to treat the balance problems but they’ve never helped much. They would only make a dent and wouldn’t have much lasting effect. It’s hard to tell but it seems like doing yoga poses every day actually has. I do the poses between a table and a wall so that I can catch myself when I inevitably fall. I used to do yoga regularly but this is a simpler version of what I used to be able to do. The poses I do that target balance are warrior pose, tree pose, balancing stick, and triangle. I often meditate after I do my exercise. Exercising is working best for me in the mornings right now so I'm rolling with it.

Yoga is definitely not for everyone so if you are considering it I’d recommend talking to your doctors or other medical professionals first to see if it could help you.

-  My improved balance has helped my mobility too. I have had to use mobility aids for a few years because of weakness from Myasthenia, balance problems, and orthostatic intolerance from POTS. Basically, whenever I am upright and moving my body is screaming “WHY WOULD YOU EVER DO THIS TO ME”. Yet, I still push myself to move. I try to get out and walk every day with my trekking poles, which my physical therapist suggested. They let me use mostly my upper body when I walk since my weakness is mostly concentrated in my legs and they give me added stability.

Last week I actually made it farther than I have in many months. I made it all the way to the corner of our street (about half a block). I was starting think I’d never make it that far again but I did! Husband took a picture for me to commemorate the moment. I’ve been walking to this point almost every day since! I'm thrilled. 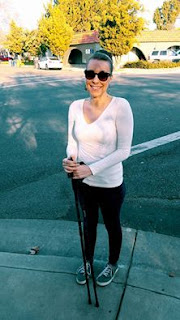 -Monday was Rare Disease Day, which started initially in Europe but now has become a global event. The definition of a “rare disease” sometimes varies between countries. In the US, it is defined as a disease that affects fewer than 200,000 people. Myasthenia Gravis is considered a rare disease but POTS is considered a “rarely diagnosed” disease. Statistically, 1 in 100 teens are affected by Dysautonomia, but it is much less common to have initial symptoms later in life (which is what happened for me). Since Dysautonomia is an umbrella term, there are rare forms of it that qualify as a “rare disease” such as Pure Autonomic Failure or Familial Dysautonomia. Ehlers-Dalos Syndrome, a rare connective tissue disorder often associated with Dysautonomia, is a rare disease. 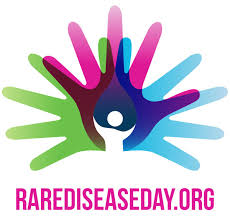 Rare Disease Day is a great opportunity to raise awareness about rare diseases since research and treatment options are so limited for these diseases and patients typically must endure many years of testing and even misdiagnosis to finally get a true diagnosis.

I had hoped to bring you information about the event sooner but I’ll have to aim for next year. We still have Myasthenia Gravis Awareness month in June, Invisible Illness Week likely in September, and Dysautonomia Awareness Month in October, but every day is an opportunity to raise awareness!

MyAware Ireland shared this video on Monday with a brief explanation of Myasthenia:

- A few posts ago, I outlined some of my goals for the year and I mentioned that I wanted to work on a few projects with husband, including my mom’s antique armoire she gave me many years ago that’s been sitting unfinished in our garage. A few weeks ago, I went out into the garage and husband had moved it into the middle and he said “let’s make it happen.”

I can’t remember when my mom bought the armoire but I know I was a teenager or younger. She decided to refinish it and sanded it, but never finished it and decided to get rid of it. Before we moved to Nevada, I told her to keep it for me so I could have it someday. It’s sadly been sitting in a garage unfinished for over a decade but we finally finished it! Husband did about 85-90% of the work, but now it’s sitting in our room and I’m over the moon that it’s finally back to its full glory. I wish my mom could see how beautiful it turned out. 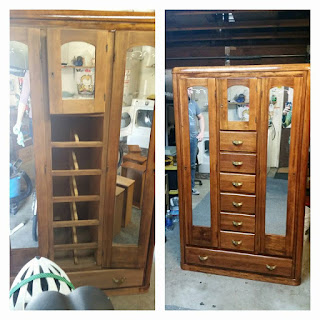 - I was supposed to spend Monday this week lying in the VERY LOUD TUBE for an hour and a half doing my brain MRI, but instead I was home working on recovering from February's douche-baggery. Instead, we played games with our friends. Game time is serious business for me, husband, and our friends. We try to play once a week and have been for years. Now, they move the table to the couch so I can play from there. It’s hard to feel down about life with good friends like this

I hope all of you out there are doing well!
Posted by Stefani Shea at 2:50 PM 6 comments: