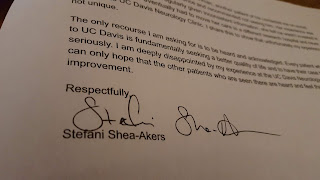 I've been meaning to share this for awhile. I have talked about my trips to UC Davis here and on social media and a bit about how frustrating our experience there was. Our first visit there was in November 2017 and the last was February 2019. Before this, I went to Stanford for years, until my doctor there started me on treatment that made significantly worse and I was bedridden for two years. Good times! Davis is closer and easier logistically for us. We also thought finally seeing a Myasthenia Gravis expert would allow me to make some real progress. Well, not so much.

I am sharing my letter I sent to UC Davis here because this is the first time I've ever written a letter like this, but I imagine it will resonate for others who have spent years in the trenches of the medical system. It isn't the first time I've been accused of faking my symptoms. It likely won't be the last.

I did some tele-therapy earlier this year and as I was telling the therapist how angry and frustrated I was about what happened with this doctor, she encouraged me to write a letter. This doctor basically ignored how sick I was and then abandoned me. He left me even more hopeless. I couldn't get passed it. I couldn't let it go. So I wrote this letter in hopes to say my piece and be able to move forward. Here it is in full with the doctor's name redacted:

To Whom It May Concern:


I initially saw Dr. [...] at the end of 2017. I had been bedridden for over a year at that point and relied on BiPAP to help me breathe and a wheelchair as I am unable to walk. The specialist I had been seeing at Stanford before this put me on treatment for Myasthenia Gravis that made me significantly worse. I was not well enough to return to Stanford. UC Davis is closer to where we live, and I thought I would receive better care with a Myasthenia expert. I came to the UC Davis Medical Center in utter desperation. Our first appointment went well, and my husband and I left with a lot of hope. Dr. [...] ordered blood tests and asked that we return in a few weeks.


Our second appointment was deeply disappointing and emblematic of most of the appointments that would follow. Our appointments with him were very brief, usually 15 minutes or less. He did a very cursory neurological exam. I always wondered how he could glean any real information about my condition from them. I was a patient at Stanford for years before switching to UC Davis. My appointments there were always an hour or longer. At the end of this second appointment, Dr. [...] left so abruptly I didn't get to ask any questions. My husband had to go to the front desk to ask if our appointment was over. We did not know what happened. I wish I had realized then that I was not going to get the care I so desperately needed. From then on, my husband and I never felt he was invested in my case.


I saw Dr. [...] for a year and a half and every appointment was basically the same. We would discuss the treatment and surgery I needed but none of it ever materialized. Thymectomy surgery is the best chance for improvement for Myasthenia patients, especially for patients who have not had great success with typical treatments like me. The only treatment that changed while I saw him over that time was when I would ask him to increase my immunosuppressant. I did not know what else to do to try to stabilize my condition.


In August 2018, I was transferred from my local hospital to UC Davis hospital with a Myasthenia exacerbation. My diaphragm was barely moving so I was struggling to breathe, I could barely lift my limbs, I was struggling to chew and swallow. I was given IVIG treatment for the first time and made an improvement. The care I received at UC Davis hospital was exceptional. The doctors, nurses, and staff were incredible. The neurologists told me Dr. [...] would come by to see me while I was hospitalized there. He never did. In fact, he passed me in the hall while I was being transported once but did not acknowledge me.


I have been hospitalized six times in the last year because of my MG symptoms, particularly my diaphragm weakness. At times, my diaphragm has been paralyzed. Despite my repeated hospitalizations, I was still not given treatment or a referral to a surgeon.


I stopped seeing Dr. [...] at the beginning of this year. I discovered that he had been commenting in his medical notes that my symptoms may be "psychosomatic". I have seen many doctors over the years and none had ever used that word in my medical documentation. I was shocked, disturbed, angry. I still am. Since my MG symptoms began in 2013, my health quickly declined. I lost the ability to walk or stand and I had to leave my academic career at the age of 33 because I was no longer able to work. I now have to rely on my husband for help with basic tasks. I am essentially homebound. Who would choose this life? Essentially, I felt that I was being blamed as the patient because the answers about my condition were not simple or straightforward.


We were also given inconsistent information at some of my appointments. At our last visit earlier this year, Dr. [...] gave me opposite advice to what he had been saying for over a year. He expressed doubts about my diagnosis and said I didn't need treatment or surgery and referred me to someone else. I had just gotten out of the hospital again because of a Myasthenia exacerbation a few weeks before this. My husband and I sat in stunned silence. We couldn't believe what we were hearing. That was our last visit. I have no plans to return to the UC Davis Neurology Clinic now.


I am in the process of moving all of my specialized treatment back over to Stanford, which is disappointing because going there is much more difficult for us. Traveling continues to be very challenging for me. I have already seen a surgeon locally and a thoracic surgeon at Stanford and will hopefully be having my thymectomy at Stanford soon.


I am most frustrated by the inconsistent information we were regularly given and Dr. [...] comments in my medical record. He had never once told me in person he thought any part of my condition was "psychosomatic". He had never even intimated this to me. Now that comment is permanently in my medical record, and there is nothing I can do to change it. I find this incredibly disturbing and harmful.


This experience created even more stress for me and my family at a time when I was very ill and stress worsened my condition. I felt abandoned, unfairly blamed, and hopeless. I'm grateful my local neurologist and other specialists were willing to take over my treatment despite what Dr. [...] had put in his notes. I now receive regular IVIG treatment, which has stabilized my condition enough to no longer be hospitalized every other month. I don't know where I would be if my local neurologist had not made this happen for me.


Before my first appointment with Dr. [...], another patient of his contacted me on social media. She described her experience and recommended not seeing him. Her experience was similar to mine: she was regularly given inconsistent information, she felt he wasn't invested in her case, and she eventually had to move her care to a different research hospital and never returned to UC Davis Neurology Clinic. I share this to show that unfortunately my experience is not unique.


The only recourse I am asking for is to be heard and acknowledged. Every patient who comes to UC Davis is fundamentally seeking a better quality of life and to have their case taken seriously. I am deeply disappointed by my experience at the UC Davis Neurology Clinic, and I can only hope that the other patients who are seen there are heard and feel that they can make improvement.


In my efforts to be diplomatic, I said how I felt but I also had to leave much implied and unsaid: I wish I had never seen this doctor. I wish we wouldn't have wasted so much time, money, energy on trips to see this doctor.

My main regret is ever letting this doctor make choices for me and now his comments are permanently in my medical record. They have already affected my access to treatment. Thankfully I have local doctors who know me and rejected his comments.

It's honestly still really difficult to talk about it. I'm ready to move on.  But it's not over yet. I got a letter from patient relations at UC Davis saying they are doing an "investigation" and would get back to me. That was over a month ago, and I still haven't received a letter.

I did get an email a few days ago from an administer apologizing for my experience and saying she felt "saddened" by my letter. There was more. I considered responding but I'm tired. I said my piece. I want to move on.

When I get the letter from patient relations, I'll share what they say.

The very first doctor I saw when all this started dismissed me. You can read my narrative about the beginning of this journey here. I mainly wanted to share this letter here so that other patients know it's ok to write a letter like this. The problem is we always just walk away and never say how much we've been harmed. Doctors have so much influence in our lives. I have just walked away from doctors so many times and never shared my story. The therapist I was working with said to me "you do patient advocacy for others but you won't advocate for yourself?" She was right. Writing this letter did help. I don't fantasize about sending this doctor a flaming bag of dog poop as much. I've already been seen at Stanford so in terms of my specialized care we've already moved on.

My experience at Davis clouded much of this year, and I really hope next year will include more positive experiences with the medical system and how we finally found treatment that helps me. That's the dream.

So much has happened since my last post about my surgery that never happened. I'm going to try to write an update post soon.

Thanks for being along on this ride 💕 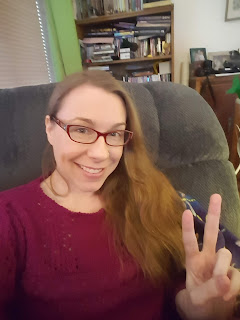